Permanent magnets are used in a variety of places. Particularly, their demand for electric cars has spiked in recent years and is expected to increase for wind power generation and robotics. In order to mass-produce high-performance magnets for these purposes, it is necessary to select a permanent magnet that uses no or minimal amounts of critical elements and that can produce a high magnetic force at the operating temperature.

As the first half of the Element Strategy Initiative was coming to a close, we created an extremely pure single-crystal thin film out of the ThMn12-type 1-12 Sm-Fe-Co compound and measured a saturation magnetization which greatly surpassed that of the conventional Nd2Fe14B.[1] Moreover, at temperatures exceeding 300 K, this film exhibited higher magnetization than any conventional compounds used in permanent magnets. Furthermore, when comparing the magnetization and magnetic anisotropy of this material to various other materials at 200°C, both values were found to be greater than those of conventional neodymium magnets that contain a large quantity of Dy to allow usage up to 200°C.

Therefore, it is our wish to somehow develop this 1-12-type Sm-Fe-Co material into a practical material.

Constructing a Database for Thermodynamics

Permanent magnets do not exhibit coercivity in a single phase material. They have to be made in multiphase structures to prevent a reversal of magnetization generated near their surface from penetrating inward. The addition of dysprosium in conventional neodymium magnets is causing a decrease in magnetization. Therefore, our current goal is to control multiphase structures in order to draw out the ultimate performance as expected from the inherent properties of the material. Our scientific tools to achieve this goal include an “atomistic theory of coercivity” as the guide for structural control of materials in atomistic levels, and the “database for thermodynamics” as a guide for designing material processing routes.

First, I will touch on the database for thermodynamics. Magnetic materials have extremely fine microstructures that inherently are non-equilibrium. Research on modeling the dynamic processes that generate such structures has quite advanced by the works in this project. It is now possible to elucidate the relationship between the generation of a certain structure and its physical properties, such as the ranges of its diffusion coefficient, surface energy, and formation energy, from theoretical calculations. The data are progressively improved by adding empirically acquired values.

In the next phase, we would like to incorporate machine learning to be able to estimate physical properties from structures as an inverse problem. Currently we are working on developing descriptors for the magnetic materials.

The atomistic theory of coercivity of permanent magnets was created through research at this center and is on the way of further developments. Conventional theories of coercivity use continuum modeling that is unable to address structures smaller than the exchange length (several nm). The atomistic theory of coercivity, on the other hand, is based on an atomic model, in which the atomic arrangements and magnetism of each atom are taken into account, and also incorporates the effects of thermal activation.[2]

For example, one can create an atomistic spin model of Nd2Fe14B with a magnetic moment set for each atomic lattice point and postulate spin-spin interactions found through first-principles calculations. By using the spin model, it is possible to calculate dynamic aspects of magnetization reversal and to calculate temperature dependence of magnetic properties, such as magnetization and anisotropy, as thermo-statistical properties. It is also now possible to postulate coercivity at the operating temperature by calculating the energy barriers in reversal process of magnetization. This is a very important step in the development of the theory of coercivity and we can now discuss the effect of thermal energy by comparing temperature variations in coercivity by switching the thermal activation on and off, for example.

Large-scale simulations using first-principles calculations were performed on various grain boundaries to determine the microstructures of these boundaries, which are the contact point between the atomistic model and the actual macroscopic materials.[3] We calculated how these microstructures changes when trace elements are introduced. We also created a spin model for a 1-12 system that shows a high level of agreement with experiments on the temperature dependence of magnetic anisotropy. 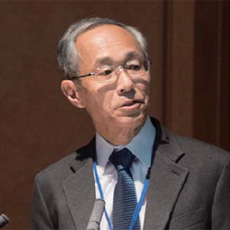