Photos of the TSUBAME supercomputer, the model of a defect, and Prof. Oba and Dr. Kumagai

I specialize in the study of theoretical materials science. This fascinates me because I can learn the properties of known superior materials and predict those of as-yet-unknown materials. Today we have the capacity to perform high-precision calculations owing to improvements in computer performance and advances in computational methods, enabling us researchers to study unknown materials while engaging in a battle of wits.

“I chose to study theoretical materials science because I wanted to learn what gives rise to physical phenomena in materials.”

“As a high school student, I was interested in the environment and wanted to make the world a better place through the power of research.”

Setting his sights on becoming a researcher, Dr. Kumagai enrolled in the Undergraduate School of Global Engineering at Kyoto University. He was involved in fabricating electrochemical materials and analyzing them through experiments. It was at this time he became interested in understanding the origins of the physical phenomena that occurred during the experimental processes. To investigate these origins he knew he would need an understanding of such principles in terms of electron theory. Therefore, he switched his major to theoretical material sciences upon entering graduate school.

Math had come easy to Dr. Kumagai since childhood and developing computational techniques in graduate school came second nature to him. One approach to predicting the behavior of electrons in solid matter uses first-principles calculations based on quantum mechanics. During his time in graduate school, he was developing a calculation technique for calculating highly precise X-ray absorption spectra obtained in experiments, and a technique for identifying the positions of atoms in magnetic alloys. The former technique provides clues for learning the electronic structures of transition metals and was used to target cobalt oxides such as LiCoO2 serving as the cathode material in lithium batteries. The latter technique can be used for predicting stable structures based solely on theoretical calculations and was used on the NiO-MgO alloy to demonstrate its usefulness.

“I experienced firsthand how the environment develops the researcher.”

In April 2011, the year after acquiring his Ph.D., Dr. Kumagai was accepted to the group of Prof. N.A. Spaldin, a professor of ETH Zürich, under a postdoctoral fellowship for research abroad provided by JSPS. At this group, Dr. Kumagai was involved in a research study aimed at theoretically investigating the structures and energy of domain walls (a boundary separating a region or “domain” whose electric polarization follows one orientation and a domain whose electric polarization has a different orientation) present in ferroelectrics (materials possessing spontaneous electric polarization, even when an electric field is not being applied). Their results, published in the journal Nature Communications, are particularly important for explaining the occurrence of a peculiar phenomenon called a cloverleaf domain structure in which six different domains emerge from a single point.

“I am relieved to have produced such an achievement after having transferred to a different research environment. Moreover, I was able to have so many interesting experiences that would not have been possible had I not gone overseas,” Dr. Kumagai reflected.

“The values possessed by researchers at Kyoto University and Switzerland were quite different and led to different approaches to their subjects of research. While at Kyoto University, researchers set their own research topics and carried out this research independently, research in Switzerland was conducted in teams with in-depth one-on-one discussions held frequently with the professor.

“Certainly a researcher gains some strength under the Kyoto University system because the researchers have to think for themselves, but there is some risk that an inexperienced researcher could waste time pursuing an unsuitable topic. I cannot say definitively which style is best, but the European approach to research might be difficult to implement in Japan because the professor must have sufficient time to spare.”

After a year and eight months in Switzerland, Dr. Kumagai changed research environments once again, returning to Japan to accept a position as special appointed assistant professor at MCES, Tokyo Institute of Technology.

“At Kyoto University, I had conducted research primarily with theoretical scientists, but at MCES we theoretical researchers were surrounded by experimentalists in project meetings and heard many detailed discussions of their work. Not only that, but the level of their experiments was quite advanced. It was tremendously educational.”

In this environment, a relationship of trust is cultivated between the experimentalists and theorists. Recently the researchers established a prediction-driven process in which the theorists propose solutions to some problems through theoretical calculations and an experiment group attempts to confirm the results. As an example, in a study on copper nitride (Cu3N) that was published in June 2018, Dr. Kumagai and his coauthors predicted that the addition of elemental fluorine would produce a p-type semiconductor, which was subsequently demonstrated by the experimentalists.

“Our goal is to develop versatile calculation techniques.”

At the group of Prof. Fumiyasu Oba to which Dr. Kumagai belongs, researchers design and explore novel electronic and energy materials utilizing cutting-edge computational science. As a member of the laboratory, Dr. Kumagai develops calculation techniques for elucidating the physical properties of semiconductors.

Part of their research is devoted to studying the properties of point defects, which greatly affect the properties of semiconductors. A point defect is an imperfect part in the atomic arrangement of a crystal and may be any of various types, including a “vacancy” in which the desired atom is missing, a “substitutional defect” in which the desired atom has been displaced by a different atom, and an “interstitial defect” in which an atom occupies a site in the crystal where none usually exists. Even just 1 abnormality in one million sites of an atomic arrangement can change the extent at which electricity current or the mobility of atoms, greatly modifying the properties of the material. While the term “defect” in its name may give the impression that a point defect produces an adverse effect, this is not always the case. Point defects may produce good effects as well. The performance of a material can be improved considerably by purposely introducing point defects.

“With this computational method, I calculated point defects in phosphides, sulfides, and nitrides anticipated as novel semiconductors, described their behaviors as semiconductors, and proposed methods for controlling their properties.”

Dr. Kumagai’s method of calculating point defects attracted much attention overseas in particular, and he has been inundated with email asking permission to use his program.

“In the West there has been a tendency to make one’s program available to the public prior to publishing a paper. This allows the researcher to receive feedback on any bugs in the program and make improvements. Moreover, circulating one’s program may heighten one’s name recognition. It was my impression that this is of paramount importance in the West.

“As a researcher, improving one’s name recognition has the synergistic effect of increasing the amount one’s article is read. Unfortunately, regardless of how good your research findings are, they will not become known unless people read your paper. With this in mind, I have begun to consider that it may be best to put more effort into providing access to my programs.”

This conceptual diagram illustrates an electron (e–) and a hole (h+) introduced into a crystal as a result of impurities (green and orange) displacing atoms in the crystal (purple). The properties of the semiconductor change considerably according to the types of impurities being introduced.

“We are working on building a computational materials database targeting semiconductor materials.”

“Technological innovations in programming languages occur at a rapid pace, and it is quite challenging to keep up with the latest programming techniques.”

Under these circumstances, programming specialists in Europe and America are migrating toward materials science. This appears to have generated momentum toward not only accelerating research on materials science, but also expanding unknown disciplines through the merging of informatics with materials science.

“A computational materials database can be used to search for superior materials among existing substances. The next question to pose is how can we discover as-yet-unknown materials. Finding an approach to this problem will require fresh ideas.

In 2016, Dr. Kumagai began serving concurrently as a JST PRESTO researcher, working on constructing a computational materials database dedicated to developing semiconductor materials. Presently Europe and America provide databases with the results of calculating the atomic structures, energy, and electronic structures for hundreds of thousands of substances. However, these computational materials databases lack such information as point defects and ionization potential (the energy needed for removing an electron from a substance, which is important information for devices and other applications) required for research on semiconductor materials. Having developed computational methods for point defects, Dr. Kumagai views the development of databases in combination with point defect research. 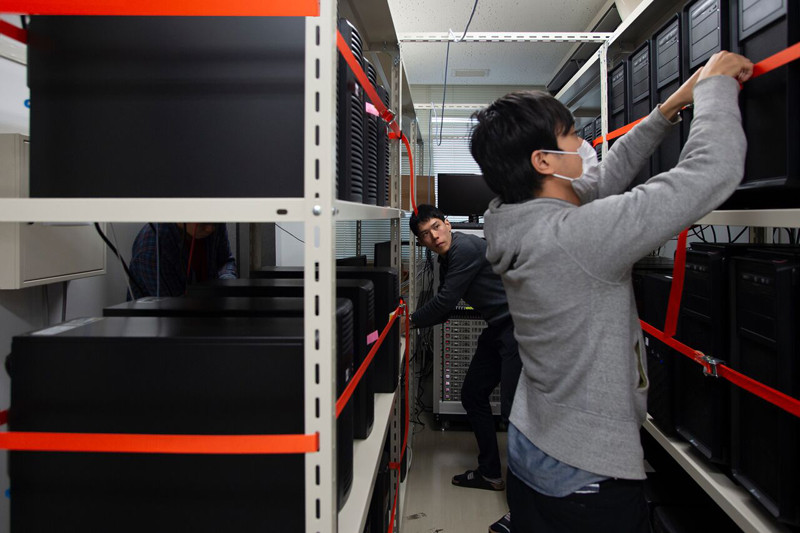 Performing maintenance on a computer cluster at the cluster room.

“The dream of a materials scientist is to be able to search for materials that are useful and easy to create.”

Dr. Kumagai has this to say about his future research plans.

“For the short-term, I would like to continue along the same path of creating superior computational techniques that incorporate new ideas and that can be adapted for applied research. In the medium-term, I hope to be able to make theory-driven predictions, derivations, and proposals for new materials that do not yet exist in this world.”

And his more distant dream?
“I would like to be able to provide feedback not only for predictions, but for actual manufacturing. At present, there is no parameter for ease of manufacturing, and I would like to conduct research to account for that. For this, close collaboration with experiments will be critical.” 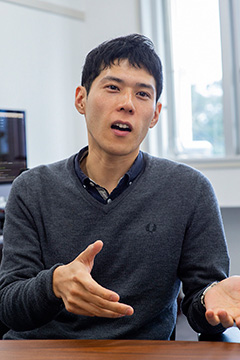 March 2013
Completed doctoral course at Kyoto University in the Graduate School of Engineering, specializing in Materials Science and Engineering