Dr. Hosokawa and a student researcher operate a reactor to observe the activity of synthesized catalyst materials.
The drawing on the left illustrates topotactic oxygen intake and release in the novel catalyst Sr3Fe2O7－δ.

Developing environmental catalyst materials is fascinating because even the most trivial variation in chemical composition or method of synthesizing the solid powders can produce unexpected performances. Observing the diverse chemical reactions that occur throughout the surface and interior of the solids when using solid catalysts to purify exhaust gases also provides opportunities to coax out novel theories.

“I’d like to explore areas of inorganic synthesis and try my hand at molecular transformation.” With these aspirations, Hosokawa was assigned to Seiichiro Imamura’s laboratory at the Kyoto Institute of Technology during his master’s course. There he was given the research topic of catalysts for decomposing acetic acid. Acetic acid is a persistent substance in the dye wastewater generated at factories when decomposing the toxic organic substances in wastewater to CO2. The smell of acetic acid changes considerably with variations in the synthesis and composition of the powdered catalyst. This realization captivated Hosokawa and stirred his interest in environmental catalysts.

For his doctoral program, Hosokawa transferred to Masashi Inoue’s laboratory at Kyoto University, where he engaged exclusively in research on the synthesis of inorganic materials. As one of the pioneers of the solvothermal method (a method of synthesizing inorganic materials in an organic medium at temperatures above 250°C), Professor Inoue discovered a unique process for creating various metal oxides using glycol solvent. This method is known as glycothermal synthesis. Hosokawa studied the characteristics of products that could be produced with these processes, such as their needle-like or plate-like shapes and the quantity of defects occurring when expected atoms are missing or have been replaced by other atoms, and studied the chain of processes required to produce such properties.

“Those three years of my doctoral course were a very precious time for me. I simply pursued my interest, which was how to produce inorganic materials, without any concern for their applications. Because of this, I was able to acquire basic knowledge in synthesis techniques and crystal structures.”

After becoming an assistant professor, Dr. Hosokawa began researching catalysts employing oxides synthesized according to the solvothermal method. Here, this single term “catalyst” covers many areas, including inorganic solid catalysts used in ammonia synthesis, organometallic compounds used as catalysts in the synthesis of pharmaceuticals, and photocatalysts. Each type of catalyst requires its own expertise, but all share the need to construct a series of chemical reactions one by one. The basic reaction with environmental catalysts involves detoxifying toxic substances such as CO by reacting the CO with oxygen in order to produce CO2. Dr. Hosokawa designed a catalyst material for purifying hydrocarbons (HC) in exhaust gases.

However, achieving effective activity with a designed catalyst is not instantaneous; it takes time to find applications for the catalyst. Through repeated experiments, Dr. Hosokawa noticed a luminescent property in the defect structures of oxides produced through solvothermal synthesis and began conducting research on phosphors concurrently.

In 2013 Dr. Hosokawa was assigned to ESICB at Kyoto University, where he shifted his focus to the research being conducted there on automotive catalysts.

Since the exhaust from gasoline-fueled automobiles contains CO, HC, and nitrogen oxides (NOx), individual automobiles were being fitted with “three-way catalysts” capable of removing all three components simultaneously. These catalysts include such precious metals as platinum, palladium, and rhodium. Reducing the use of these precious metals and developing substitute materials is now a matter of urgency.

In catalytic reactions such as chemical synthesis and petroleum refining, the temperature, pressure, and substrate concentration are controlled. With three-way catalysts, on the other hand, oxidation (transformation of CO and HC to CO2 and H2O, respectively) and reduction (transformation of NO to N2) progress simultaneously under given conditions (temperature and substrate concentration). Depending on driving conditions, the catalysts may be subjected to ambient temperatures of 1000℃. Additionally, the components of exhaust (oxygen concentration, etc.) change constantly according to the driving mode. Optimizing oxidation and reduction amid such large ambient fluctuations requires a function for rapidly storing oxygen under conditions of oxygen excess and for rapidly releasing oxygen under conditions of oxygen deficiency. Materials possessing such a function, known as an “oxygen storage capability,” have been added to recent automotive catalysts as a promoter.

The commercial oxygen storage material CZ, which is a solid solution of ceria (CeO2) and zirconia (ZrO2), has exhibited excellent performance, but is problematic due to our low reserves of the raw materials cerium (Ce) and zirconium (Zr). However, in order to develop substitute materials, we must first elucidate the mechanism of this oxygen storage capability.

Dr. Hosokawa and others focused on the changes occurring in the crystal structure of CZ as oxygen was stored and released. By studying research documents and the like, they learned that oxygen ions moved in and out of the solid CZ while the basic structure remained unaltered. Such changes are known as a topotactic transition (reaction). Exploring materials in which this topotactic oxygen intake and release occurs revealed that the oxygen storage capability of the Ruddlesden-Popper oxide Sr3Fe2O7－δ is superior to that of CZ.

For the next phase, a small amount of palladium (Pd) was loaded (supported) on Sr3Fe2O7－δ (Pd/Sr3Fe2O7－δ). Upon examining catalytic activity for the purification of automotive exhaust gases, they discovered that the catalyst exhibited high reduction activity for NOx.

For NOx reduction using conventional three-way catalysts, there were reported many cases in which NO adsorbed on the surface of the palladium or other precious metal particles, dissociating to N and O, with CO binding to O to emit CO2 and N2 (conventional catalyst in the figure). If the temperature of the exhaust gas is high during this process, grain growth occurs due to agglomeration of Pd particles. Consequently, the particle surface area is reduced, degrading the reduction function due to decreased contact with the exhaust gas.

When using Pd/Sr3Fe2O7－δ, on the other hand, the oxygen in NO oxidizes surface defect sites as N2 is desorbed (novel catalyst in the figure). It was discovered that oxygen in the surface produced by this N2 desorption migrated to interior defect sites in the solid so that surface defect sites effective for decomposing NO were immediately restored. In other words, the defect sites in the solid interior produced by topotactic oxygen desorption play a vital role in the process. While most conventional catalysts are designed to improve catalytic activity by maintaining surface area, this oxygen desorption mechanism can be used to design novel catalysts that are not dependent on surface area.

Dr. Hosokawa’s group also used the solvothermal method to synthesize a Mn-modified hexagonal YbFeO3 catalyst with a unique crystal structure. Upon examining the catalytic properties, they found that the catalyst exhibited high oxidation for propane combustion without the use of a precious metal catalyst. By using this YbFeO3 as a catalyst support and reducing the quantity of Pd to half the normal amount, the group realized better oxidation and reduction activity than with the conventional catalysts. Thus, a catalyst support that possesses catalytic capabilities itself not only can dramatically reduce the quantity of precious metals used in the catalyst, but also presents the possibility of being used alone as the catalyst. 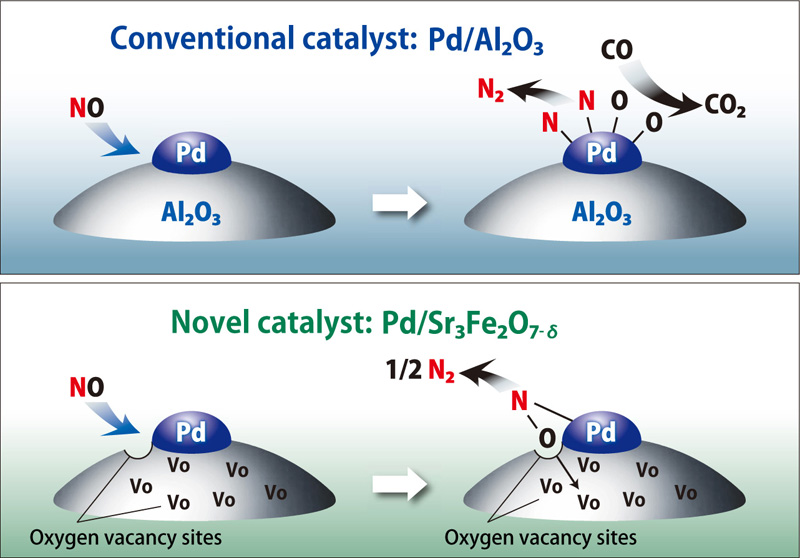 “Flexibility in modifying the method of designing catalysts”

Such methods of designing catalysts are entirely new. What these Pd/Sr3Fe2O7－δ and Pd/YbFeO3 catalysts have in common is that a small amount of Pd species elicits oxidation and reduction capabilities in the interior (bulk) and surface of the catalyst support so that new design methods are developed by elucidating the structures and functions of the bulk and interfaces. Here, not only experiments and analyses, but also theoretical calculations, and calculations of electronic states in particular, are important when researching the bulk and interfaces. For this reason, Dr. Hosokawa sought out cooperation from the Electronic Theory Group of ESICB and looked for clues by first discovering a catalyst support material possessing an oxygen deficiency effective for decomposing NO.

“Consequently, recent research has focused on not only oxidation/reduction capabilities of the bulk and surface, but also surface structures and support-metal interfaces. Since our research on automotive catalysts initially focused on the structures of supported metal present on the solid surface, my catalyst designs have alternated between the surface and the bulk.”

Automotive catalysts emerged in 1970 when air pollution had become severe. Since then, the performance of these catalysts has continued to improve, resulting in the establishment of stable and reliable catalysts capable of functioning maintenance-free from several years to more than ten years.

In the meantime, emissions regulations for automobiles grow stricter every year, which has led to the development of low-emission, fuel-efficient vehicles and alternative fuel vehicles. These developments have also given rise to changes in the exhaust gas environment. That is, advances in hybrid vehicles have resulted in a drop in the temperature of exhaust gases. On the other hand, catalysts must be designed with the understanding that they may be exposed to high-temperature atmospheres. For example, Mn-modified hexagonal crystals anticipated to be used as a new catalyst demonstrate excellent activity at low temperatures, but stop functioning at temperatures exceeding 900℃ because their crystal structure breaks down. Thus, commercial use of this catalyst is impossible, even if the problem were to occur as seldom as once in ten years.

To make catalysts adaptable to such ambient changes, improving catalytic activity in low-temperature environments is a challenge that must be met.

“In researching automotive catalysts, we are attempting to reach conclusions on the extent that we can meet the stringent requirements of such catalysts while drawing on the knowledge and experience we have acquired through our studies and carrying out daily discussions with students and teachers, including Director Tsunehiro Tanaka.”

And on that positive note, Dr. Hosokawa headed off to tackle new challenges. 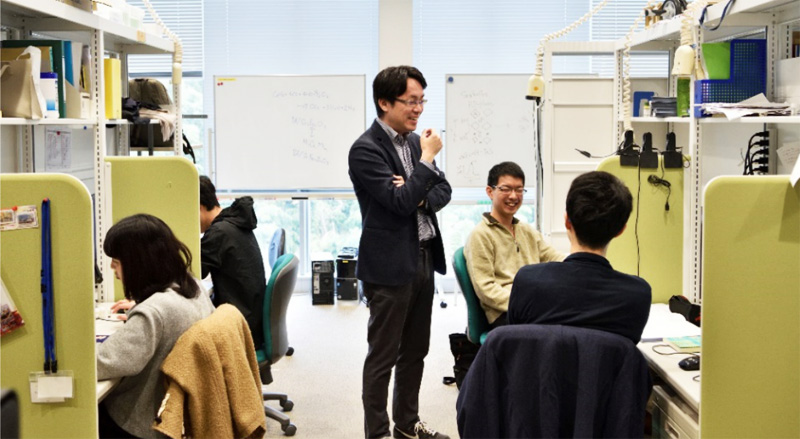 Dr. Hosokawa chatting with student researchers at the lab. He has full confidence in his staff. 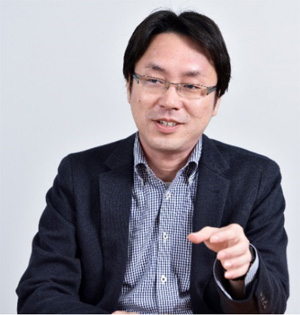 Associate Professor of the Elements Strategy Initiative for Catalysts and Batteries (ESICB) at the Center for the Promotion of Interdisciplinary Education and Research (C-PIER), Kyoto University

May 2007
Assistant Professor at Department of Energy and Hydrocarbon Chemistry, Graduate School of Engineering, Kyoto University