Report on the nano tech 2020 Exhibit

The Element Strategy Initiative: To Form Core Research Centers operated a booth at nano tech 2020, which was held Jan. 29–31, 2020 (Wed.–Fri.) at Tokyo Big Sight, in order to present an overview of the initiative and highlight key achievements by the four research centers. 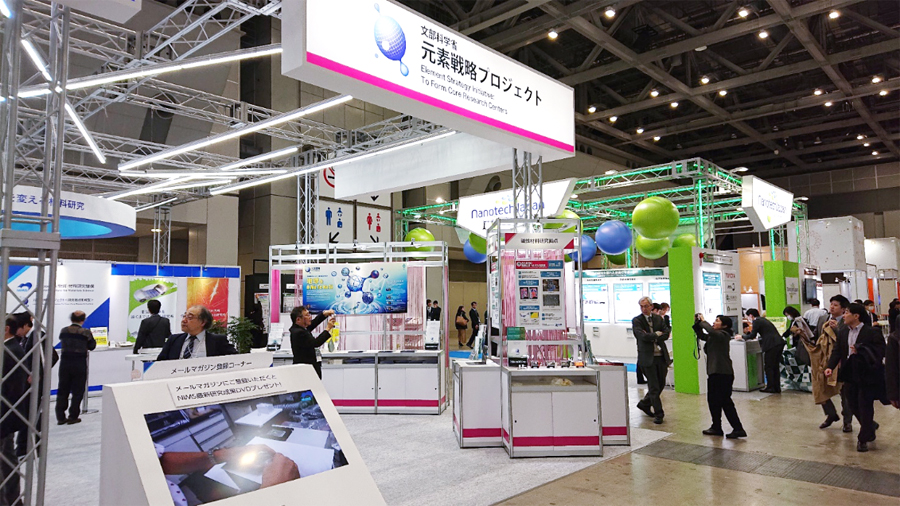 Many visitors to the exhibit expressed interest in the magnets on display, and the Center distributed a large number of pamphlets prepared for this event. The exhibit featured a NdFeB magnet, which is currently the world’s strongest, and a SmFeCoTi magnet being developed for the next generation, though clearly the NdFeB magnet was the star attraction. The Center fielded numerous questions on how theoretical searches for new materials are performed using computer science, a recent trend described on the panel. Due to the nature of the nano tech event, a large segment of people visiting the booth had little knowledge of magnet research. Thus, exhibiting real magnets and presenting technologies through photos to attract people with only general knowledge of magnets proved to be a successful way of publicizing the Center’s work. 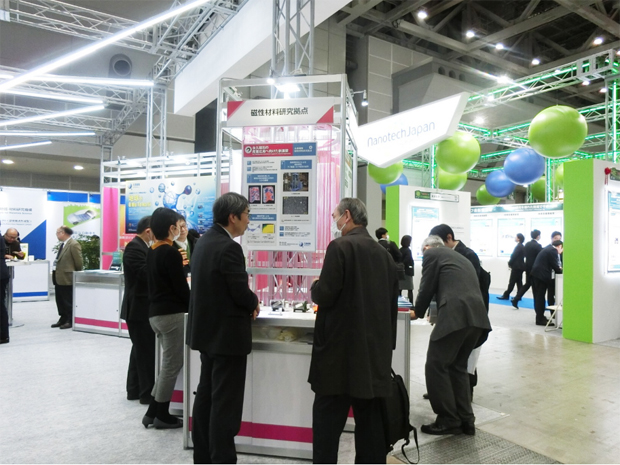 TIES exhibited a panel entitled “High-performance electronic materials possessing novel functions with hydrogen based on novel material design.” Staff handed out a large number of the pamphlet “Element Strategy Research Centers” to visitors. Approximately 15 people stopped by the booth each day for an extended period of time to hear our explanations and engage in discussion.

This year the Element Strategy Initiative booth was located in the back, away from the company exhibits. Perhaps for this reason, nearly half of the visitors to our exhibit were people who just happened by and had absolutely no knowledge of element strategies. On the other hand, many of the visitors were interested in specific results related to semiconductors, dielectrics, materials informatics, or hydrogen. Occasionally, their questions were so technical in nature that our staff could not give adequate answers. Approximately half of the visitors were in industry.

Some specific topics that drew a large amount of attention were (1) novel high-performance electronic materials for light-emitting diodes in flat-panel displays, (2) searches for new materials based on novel concepts for materials design including materials informatics and molecular orbital methods, (3) novel ambipolar semiconductor materials, and (4) ultrasensitive measurements for hydrogen concentration in materials. 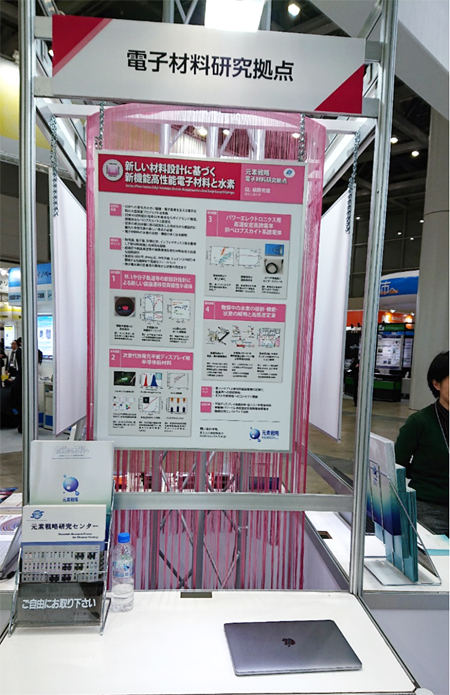 ESICB displayed a single panel summarizing four of its latest research topics, including “Precious metal-free automobile three-way catalyst: Tandem catalyst system” and “Unveiling the mechanism of CO-NO reaction over PGM-free three-way catalyst” in the field of catalysts, and “Emerging superfunctions in liquid electrolyte” and “A sodium-ion sulfide solid electrolyte with unprecedented conductivity at room temperature” in the field of batteries. To illustrate one of the superfunctions of electrolytes, we played a video again this year that attracted many visitors to the booth. The video shows electrolytes being applied to fire and extinguishing the flames. In conjunction with the pamphlet introducing the overall Element Strategy Initiative, we handed out approximately 300 pamphlets announcing an ESICB event to be held in March.

Visitors to the booth this year again included many researchers and students in technical fields, but also non-technical people involved in related businesses who came to hear what achievements our Center had produced. Visitors in related fields were pleased to receive the latest edition of the annual report our Center issues each year and snapped up all of our copies. The event proved a great opportunity to share new theories and technologies produced at the Center with industries in Japan and overseas. 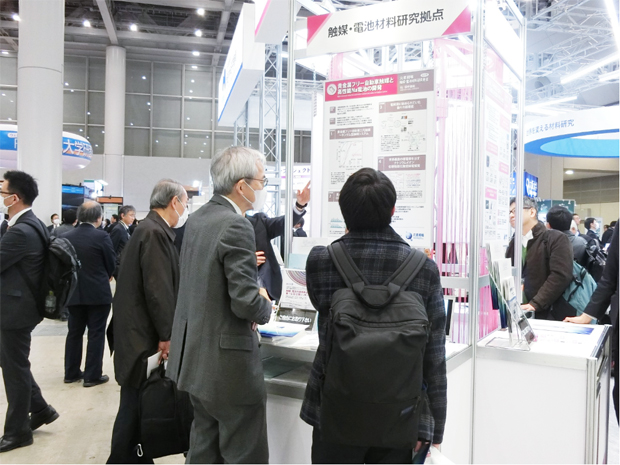 It is essential that structural materials for sustaining a safe and secure society possess both strength and ductility. The challenge we face with hexagonal metals is overcoming the poor ductility attributed to their crystalline structure. ESISM exhibited a panel entitled “Concurrent enhancement of strength and ductility in bulk nanostructured hexagonal metals.” Using the example of magnesium alloys, the panel introduced the new concept of plaston advocated at our research center, provided examples demonstrating how its application enhances both strength and ductility, and suggested a roadmap for future research developments and fields of application.

The exhibit drew particular interest from engineers and researchers of companies that handle metal materials who listened to the staff’s explanations with great enthusiasm, but also managed to attract people from a wide variety of positions and backgrounds. Among those who stopped by were university alumni interested in learning about the latest research being conducted by their university. Participating in a large-scale exhibition such as nano tech enables us to tout the efforts being made at our Center and in the Element Strategy Initiative as a whole to a segment of the population that our normal disseminations do not reach. 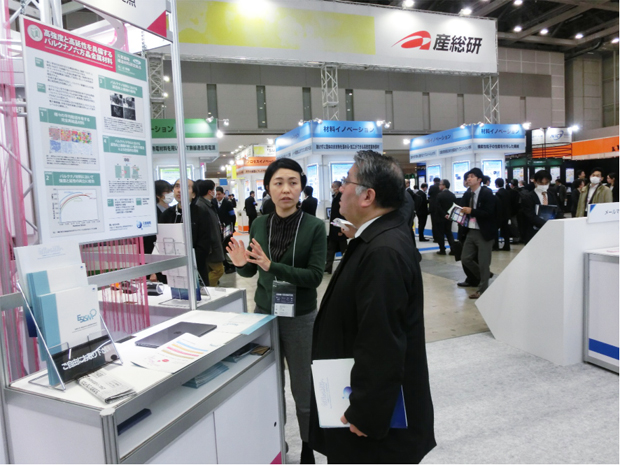 Due to the effects of the coronavirus and our booth being located apart from the company-related booths, there was concern that we might not receive as many visitors this year. However, arranging the booth layout so that the main panel of the Element Strategy Initiative with the most impact was easily visible from the pathway proved effective as many people began dropping by immediately after the event opened. All 600 pamphlets that had been prepared for this exhibit were distributed by 2 p.m. on the last day of the exhibition. We even handed out most of the past research digests and other leaflets. Hence, nano tech 2020 once again demonstrated itself as an effective tool for publicizing our work.

Among the visitors stopping by the main panel that left a particular impression were people involved in managing large-scale projects in various Asian and European countries. While explaining the panoramic image of the Element Strategy Initiative, visitors showed great interest in and asked questions about the management structure of the project and collaboration among the centers. Personnel from Hamagin Space Science Center in Yokohama expressed interest in the basic efforts being conducted in materials science for element strategies and discussed the possibility of collaborating on content aimed at conveying the importance of materials science research to pupils of elementary and middle schools. Thus, it seems important that our efforts in the Element Strategy Initiative can appeal to the general public and the international community.