Protons (H＋) are typically the carrier in hydrogen ion conduction. Numerous H＋ conductors have been developed in a variety of systems, including oxides, polymers, and solid acids.

However, the anion of hydrogen, hydride (H－) (Figure 1), has an ionic radius suitable for ionic conduction at the same level as oxide ions (O2－) and fluoride ions (F－) and possesses very strong reducing properties. By employing H－ conductors in energy storage and conversion devices, there is potential for developing new energy devices with high energy density. Despite the excellent characteristics of H－ as charge carriers, very little actual exploration has been carried out on suitable materials for H－ conduction since the 1970s when H－ conductivity was first identified in hydrides of alkaline earth metals.

With the aim of achieving H－ conduction in the crystal lattices of chemically stable oxides, we focused our material exploration on oxyhydrides possessing anion sublattices shared by both H－ and O2－. Use of oxyhdrides makes it possible to vary the H－ concentration and arrangement in the lattices. We discovered the H－ conductor La2-x-ySrx+yLiH1-x+yO3-y (LSLHO) having pure H－ conductivity, which does not contribute to electron and hole transport. The constituent elements lanthanum (La), strontium (Sr), and lithium (Li) have stronger electron-donating properties than H－ to inhibit electron conduction accompanied by the electron donation from H－.

Through the cation sublattices formed by cations such as Li having a stronger electron-donating property than H－, we came to realize during our investigation that the state of H－ is stabilized through reception of electrons, enabling ionic conduction while maintaining the ion’s negative charge.

We also determined the crystal structure of LSLHO through neutron and synchrotron X-ray diffraction (Figure 2). H－ showed a tendency to selectively occupy sites around low-valence cations in the lattices of oxyhydrides. We plan to continue exploring such materials having higher H－ conductivity using these results as a guideline for material design.

We would like to apply H－ conductors to energy storage and conversion devices in the future. Therefore, while we have synthesized LSLHO under high pressures thus far, we are currently working to establish methods of synthesis under ambient pressure in order to simplify the production of LSLHO, and are studying the effects of such pressure on synthesis.

Figure 1 Focusing on hydride (H－) as a new charge carrier 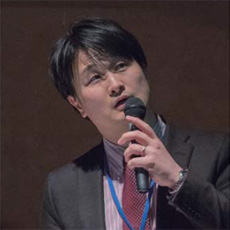