In the Element Strategy Initiative: To Form Core Research Centers implemented under MEXT, program directors are commissioned to be coordinators between MEXT and the research institutes in order to facilitate implementation of the initiative.

In 2007 MEXT launched its Element Strategy Initiative: To Promote Industry-Academia-Government Collaboration. Fifteen research topics were adopted over the course of three years, with each topic being allocated five years of R&D. I also served as Program Director for this initiative. One of the most difficult aspects of this position was that, unlike public research funded by Grants-in-Aid for Scientific Research, commissioned research comes with a contract, the concept of which requires considerable time for both the director of the center and the researchers themselves to comprehend. Another issue that I faced was the withdrawal of some companies from the project due to their own internal reorganization.

The Element Strategy Initiative: To Form Core Research Centers was established in 2012 as a ten-year program adopting four research areas. This year marks the sixth year of the initiative, and the second interim evaluation will be conducted as each research area continues to produce significant results. While I struggled mightily gain the understanding of the concept of the research contract under this initiative as well, I am proud to say that the initiative has become a model of national R&D programs since the first interim evaluation. When this Element Strategy Initiative was launched, Dr. Shinji Murai and I served as Program Directors, but from this point Dr. Kohei Tamao will take over as the Program Director.

This initiative encourages use of national large-scale research facilities. The first symposium for the initiative was held in 2014, and this year marks the third. While watching so many young researchers giving presentations in the poster session, it struck me that this symposium offers a great opportunity for scientific discourse and the exchange of ideas.

My life as a researcher began when I was a graduate student at Hokkaido University. At that time I was allowed to share lab equipment at the Institute for Solid State Physics (ISSP) of the University of Tokyo. Naturally, the ISSP drew researchers from around the country and their guidance offered a wonderful opportunity to learn how research should be conducted. I am acutely aware of how valuable an experience one gets by working alongside researchers from other universities and research institutes. It is our hope that this initiative provides a venue for such exchange among researchers of institutes versed in different fields and different cultures. 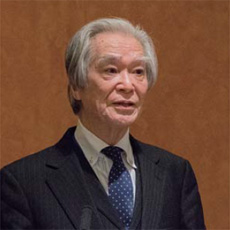